NDLEA Arrest Over 218 People for Drug-Related Offences In Imo State.

The commander of NDLEA in the State, Reuben Apeh, who disclosed this to newsmen in Owerri yesterday, to mark international day Against Drug Abuse and Illicit Drugs trafficking, said so far, 51 suspects had been convicted and 146 cases are still in court.

Apeh, said the month of June 2021 – June 2022 marks a year of appraisal of the work done to curtail and discourage both drug trafficking and illicit drug use.

NDLEA said among the various exhibits seized within the period under review included 0.10513kilograms of Cocaine, 0.2077kg of Heroin, 3.896kg of methamphetamine, 3.184kg of tramadol and 0.5278kg of Rohypnol among others. 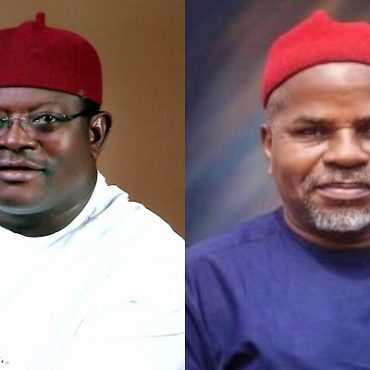 Ebonyi Central PDP senatorial candidate named a member of the state house of assembly Oliver Osi, as his running mate.

The governorship candidate of the Peoples Democratic Party PDP and the senator representing Ebonyi Central senatorial zone in the national assembly, in Ebonyi State, Obinna Ogba yesterday named a member of the state house of assembly representing IVO constituency, Oliver Osi, as his running mate. There has been a crisis rocking the main opposition party PDP, in Ebonyi State, wherein the party is currently divided into two factions, one of […]