Governor of Delta state Ifeanyi Okowa and other officials yesterday were in Osun state in honor of the party’s candidate, Ademola Adeleke ahead of tomorrow’s gubernatorial election. The presidential candidate of the people’s democratic party PDP, Atiku Abubakar, his running mate, governor of delta state Ifeanyi Okowa and other officials yesterday were in osun state in honor of the party’s candidate, Ademola Adeleke ahead of tomorrow’s gubernatorial election.

Addressing the people, the national chairman of PDP, Iyorchia Ayu who condemned the all progressives’ congress APC led government in the state, saying there is darkness in Osun state, called on the electorates to vote for the party’s candidate, stating that Adeleke will usher in good governance for the people.

In his remarks, Atiku Abubakar charged the people to vote for Adeleke on saturday and protect their votes, lamenting that elections in Osun state have been rigged for the past 12 years. 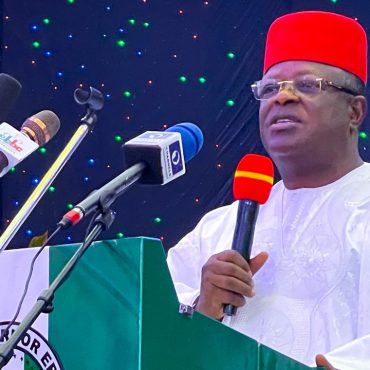 The governor of Ebonyi state David Umahi, has complained over the increasing cases of rape in the state, vowing that henceforth, there will be no show of mercy on perpetrators. Umahi, who also reshuffled his cabinet members, made this known in a statement signed and issued to journalists shortly after an executive council exco meeting yesterday, where he also praised the first lady, the ministry of women affairs and social […]