President MUHAMMADU BUHARI has called on Academic Staff Union of Universities ASUU to reconsider their position on the continued strike, expressing worry that the break will have generational consequences on families, the educational system and future development of the country.

BUHARI who revisited the issue yesterday in DAURA, Katsina State, when he received some governors of the All Progressives Congress APC, legislators and political leaders at his residence, told ASUU that enough is enough.

The President noted that the future of the country rests on the quality of educational institutions and education, while assuring that the government understands their position, and negotiations should continue, with students in lecture halls.

In his remarks at the meeting, the Chairman of Progressive Governors’ Forum, ABUBAKAR ATIKU BAGUDU, thanked BUHARI for his leadership roles in improving the economy of the nation and the many successes recorded at the APC.

The Peoples Democratic Party, PDP, has called on President MUHAMMADU BUHARI to sack every official linked to the recent attack on Kuje correctional center.

In a statement by the party’s head of New Media, ANTHONY EHILABO, it wondered why some persons allegedly linked to the attack have not been arrested, maintaining that all the service chiefs should have been fired to pave the way for more capable hands that can crush the terrorists causing havoc across the country.

Recall that on July 6, terrorists suspected to be Boko Haram fighters attacked the medium correctional center in Abuja, killed at least two persons, while over 800 inmates were set free.

Some of the escaped terror suspects have, however, been recaptured from different places, including the Federal Capital Territory, Nasarawa and Niger States. 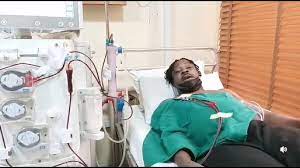 Abdulkareem’s video comes out barely 24 hours after it was revealed that he was battling kidney failure.

Abdulkareem's video is coming out barely 24 hours after it was revealed that he was battling kidney failure. The management team of the Lakreem Entertainment Inc revealed that a family member agreed to donate a kidney to the music star.