Former president, olusegun obasanjo was yesterday honoured with the zambia highest award of the order of the eagle by the president 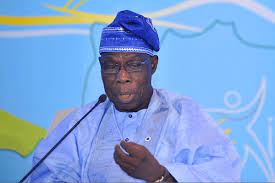 Former president, olusegun obasanjo was yesterday honoured with the zambia highest award of the order of the eagle by the president, hakainde hichilema, in lusaka, alongside ellen sirleaf johnson of liberia and ernest bai koroma of sierra leone.

The special assistant on media to the former president, kehinde akinyemi hinted that the honours were contained in a government official gazette, which was made available on wednesday.

Reacting on behalf of awardees, obasanjo said the honour would serve as encouragement to do more for the continent, thanking the president of zambia for the recognition. -President Muhammadu Buhari, has called for the establishment of an international anti-corruption court to try offenders, while charging African leaders to deepen their fight against corruption, and create more disincentives for pilfering of public funds. In his recorded remark to celebrate the African day of anti-corruption, Buhari who is the African ant-corruption champion, praised African leaders for gains so far recorded, admonishing those efforts must be intensified to prosecute offenders and collect resources […]