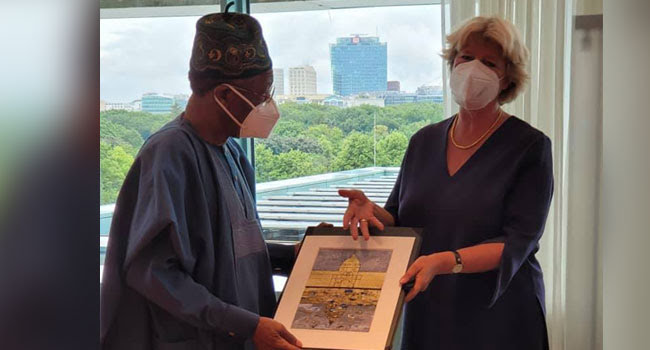 German Minister of State for Culture, MONIKA GRUTTERS has disclosed that 1,130 artefacts would be returned to Nigeria from the beginning of 2022.
GRUTTERS said this yesterday during a meeting with the Minister of Information and Culture, LAI MOHAMMED in BERLIN, GERMANY.
In a statement issued today by the Special Assistant to the Minister of Information and Culture, SEGUN ADEYEMI, Mohammed at the meeting demanded a full and unconditional return of the 1,130 Benin Bronzes that were looted from the African nation in the 19th century and domiciled in German museums.
Mohammed, stressed that there should be absolutely no conditions attached to the return of the artefacts, which he described as an idea whose time has come..
GUTTERS however, noted that the fact that Germany has twice sent delegations to Nigeria for talks over the planned repatriation is an indication that both sides have moved beyond mere talks, saying all the Museums in Germany that are holding Benin Bronzes have agreed to cooperate.